With Jameis Winston and The All Courageous Team 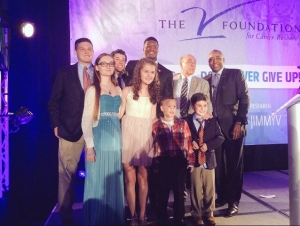 At the Dick Vitale Gala, there were many special guests and stars that were helping to raise money and awareness for pediatric cancer for the V Foundation. One of the stars that attended this event was Jameis Winston, quarterback for the Tampa Bay Buccaneers and formally quarterback of Florida State University. Jameis Winston came to the event with head coach Lovie Smith and FSU head football coach Jimbo Fisher, along with other players from the Bucs. Winston has a great relationship with Jimbo Fisher’s son, Ethan, who is battling Fanconi anemia. Fanconi Anemia is a rare and serious genetic disorder that results in bone marrow. One of Ethan’s favorite players on the team is Jameis Winston. Jameis has done a great job of giving Ethan hope and providing a role model for Ethan to look up to. Before every game, Jameis and Ethan have a special handshake that they do, which looks a little bit like this : Jameis and Ethan’s handshake.

As you can see in the picture, there are 6 kids that are all smiling at the cameras. These 6 kids are all strong kids that have fought or are fighting pediatric cancer. The 6 kids in this picture are part of Dick Vitale’s All Courageous Team and were special guests at the Dick Vitale Gala. One kid has fought over 200 rounds of chemo, another kid went through brain cancer, another kid is a 2x cancer survivor, and another kid has fought over 1,000 doses of chemo. There were stars, celebrities, and famous athletes at the Dick Vitale Gala but nobody was as strong as these 6 kids. These kids have fought through the worst disease ever and a lot of them are giving back to help others overcome the deadly disease. You should too by making a donation to : https://www.jaketaraskafoundation.com/donations