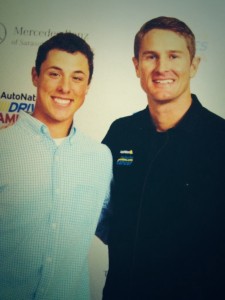 I was honored to be a special guest at the “Stars and Cars” event at a Mercedes Benz dealership in Sarasota, Florida. This event was a big fundraiser for pediatric cancer research. It was hosted by Dick Vitale, who is hugely involved in raising money and awareness for cancer research. At the event was a very successful Nascar driver named Ryan Hunter-Reay. According to Ryan’s Facebook page, Ryan is a 14 time IndyCar Winner, 2014 Indy 500 Champion, first American Rookie in over 20 years to win a Champ Car race, 2008 Indy 500 Rookie of the Year, holds the record for the most laps lead (250) in a single race, won an Espy for the Best Driver, and many more. Ryan is very successful in a car and has many accolades and awards to show how successful Ryan is at driving. However, Ryan Hunter-Reay is not only racing for himself, but he is racing to beat cancer.

Ryan has his own foundation called Racing For Cancer. Ryan put “Racing For Cancer” together after his mother, Lydia, passed away from cancer in 2009. He started this foundation to raise awareness and funds for early detection and prevention. Ryan has raised over 4 million dollars in his efforts to raise money for cancer research. Ryan is a great example of someone who plays a sport that plays for something bigger than themselves. He realizes how lucky he is to live healthy and he is doing an incredible job of finding a cure for cancer research. Not many individuals are on an high enough platform as Ryan Hunter-Reay is and more professional athletes should try to be like him and make a difference in the world. Ryan Hunter-Reay races the number 28 car in honor of the 28 million people worldwide that are fighting this dreadful disease. Meeting Ryan was awesome because Ryan and I are on the same mission and have the same goal, to cure cancer.