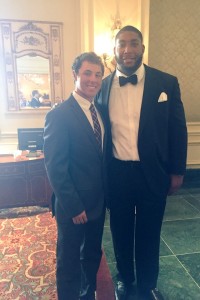 On Friday, May 15, 2015, I had the privilege to meet Devon Still at the Dick Vitale Gala in Sarasota, Florida. The Dick Vitale Gala is a huge event at the Ritz Carlton to raise money and awareness for pediatric cancer research. Devon Still is a professional football player for the Cincinnati Bengals and played for Penn State University in college. Devon Still is a successful player on the field but he is changing lives off the field. Devon Still’s daughter, Leah Still, is going through Neuroblastoma, the same cancer that I had as a child. Devon Still was extremely hurt and saddened to hear the news that his own daughter is going through cancer.

Throughout the first couple weeks of Leah going through cancer, she never stopped smiling. Even though she is fighting for her life, she was living her life to the fullest every day by smiling and being hopeful. Devon says, “ She’s just shown a relentless effort of how she’s going to fight this disease. I don’t tell her to smile for the pictures, she just always has a smile on her face.”Devon saw that strength in Leah, and he wanted to make a difference in other families lives as well. Devon raised $141,428 for the Children’s Hospital of Philadelphia. The Cincinnati Bengals also played a huge role  in helping Devon and Leah. All proceeds of Devon Still’s jersey went to the  Cincinnati Children’s Hospital Medical Center for pediatric cancer research. The Bengals started this fundraiser before the season started and has now raised close to 1 million dollars. The Bengals also released Devon in the beginning of the season but kept him on the practice squad so he can pay for his daughter’s treatment, which was a class act from the Bengals. Devon Still spreading all the news he possibly can for awareness for pediatric cancer. Devon goes around the hospital giving families and kids who are going through cancer hope and motivation to overcome this disease.

Devon’s advice to those parents whose kids are going through cancer, “Just don’t give up hope. Let your kids know that you’re going to be there for them and you’re going to help them fight to win this battle.” Devon has done an outstanding job to make a difference in pediatric cancer research by spreading awareness around the world and by raising money to children’s hospitals around the country. Only 4% of every dollar raised for cancer research goes to pediatrics. That statistic is absolutely pathetic and more money should be raised for pediatric cancer. No child should have to experience chemo or radiation at such a young age. Devon has done an incredible job with helping all of us find an awareness and raise money for pediatric cancer. His efforts are being rewarded as he was a special guest at the Dick Vitale Gala. He will also be honored at the ESPY’s when he will receive the Jimmy V Perseverance Award on July 15.   Devon was honored for his strength and courage as his daughter is fighting one of the most deadly disease in the world. I was very honored and humbled to meet such a great young man. To learn more about Leah’s inspirational fight against neuroblastoma, watch this video.