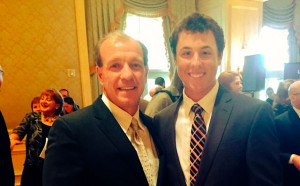 I had the privilege to meet Jimbo Fisher, head football coach of Florida State University. I met him at the Dick Vitale Gala where he was a special guest, along  with Lovie Smith and Jim Boeheim. Jimbo Fisher had everything going for him ; winning national championships, having his own family, getting big contracts, earning trophies, etc. Everything was going well for him until his son, Ethan Fisher, was diagnosed with Fanconi anemia, a rare and serious genetic disorder that results in bone marrow, in 2011. This blood disease has no cure and it has a life expectancy of 28-30 years of age. The possibility of someone getting Fanconi anemia is about 1 to every 350,000 births. Fanconi anemia also leaves patients more susceptible to other forms of cancer, including leukemia.

After keeping his sickness private, Jimbo and his wife, Candi, decided to make this go public to spread an awareness and to try and find a cure for this disease. Jimbo says, “We’re committed to finding a cure. Anything can be cured and that’s our commitment. We’re going to find a cure. We’re on a quest to find a cure.” A lot of odds are against Ethan but according to his dad, Ethan has been handling this process great.Jimbo says, “He’s dealt with it a lot better than we have. The kid is resilient and he’s amazing. He’s the last kid you’d look at on the playground and think he’s sick. He’s been wonderful and has dealt with it wonderfully.” When Ethan was diagnosed, it was really hard for Jimbo to focus on football when his child was battling a life-threatening disease.

Jimbo says, “In the beginning it was extremely hard because you feel guilty. You wanted to spend time with him and be there for him, but you had your job to do and your responsibility to those players, too. For a while, it was extremely difficult to focus. Why am I doing this (coaching) when I should be helping him?” Jimbo is doing the best he can to balance the two, but it helped him have a better perspective on life and football.

Jimbo and his wife, Candi, put together a foundation called Kidz1stFund to find a cure for Fanconi Anemia. For more information of the Kidz1stFund, go toKidz1stFund. To learn more about Ethan and his inspirational fight to survive, watch this video on him Ethan’s Fight.